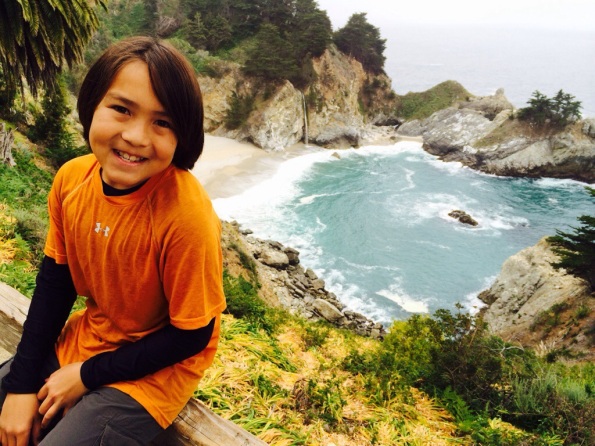 Ok where was I? Oh yeah after sequoias we hung out with some of are parents college friends sadly without the Halls:( With one of are college friends we went to Big Sur California which was beautiful there’s a picture of me above:)

From Big Sur we met the Halls at monteray bay aquarium witch was so cool we got to see sea otters and wild seals out of a window:) and there were just tons of little beaches with seals on them. From there we hit a city called San Jose near San Fransisco there we went to a cool tec museum. My favorite thing there was this robot drawing thing that you take a picture of your face and it uploads on to the robot so that it draws it.

In San Fransisco we said goodbye to the Halls for a little while and we went to Redwood national park where we spent fathers day.In the Redwoods we had a airsoft war for fathers day and if you don’t know what airsoft is look it up! And at the redwoods there were tons of elk that we got super close to:) from redwoods just are family went to portland and did a lot of things but I’m just going to skip to Bend Oregon in Bend we camped with the Halls well we camped the halls have an RV so there we got to go caving with them not really a cave but lava tubes that went on for like 2 miles and then got really short and then there was a sign that told us that was the end. In the cave all of us played hide and seek which was super fun because there were tons of huge boulders that you could hide in. So yeah thats everything we did with the Halls and i am posting in Austin TX sadly:( BA BAM!!!!!!