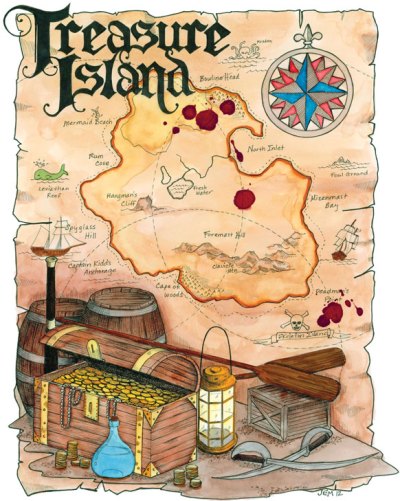 Treasure Island is a book about people looking for treasure on an island. 😉

In the beginning, a pirate named Black Dog comes into Jim’s hotel and keeps getting drunk. He tells Jim if ever a pirate with one-leg and a crutch comes in, then tell him immediately. Then Black Dog keeps drinking so much, and Dr.Livesy comes over and tells him to stop drinking or else his life will end. Black Dog gets really sick and asks Jim for some rum. Jim warned him, too that he will die.

Later, a pirate named Pew comes. He is blind. Pew asks him to lead him to Black Dog and ask him for the treasure map! Pew squeezes his wrist. Jim tries to call for help but Pew squeezes him really hard and says, “That’s what’s going to happen if you scream out!”

Jim goes in with Pew at his side. Black Dog is in the lounge, and he doesn’t have time to react because he’s so drunk, and Pew stabs him. Black Dog dies. Pew leaves

Jim searches and finds the key to the treasure box, and then his mom, and him go upstairs and open it and find some money, some old clothes, and most importantly, at the bottom, a treasure map.

So later, they hear Pew’s cane ticking as he walks up to the hotel. Jim and his mom are shocked and very frightened. Pew shakes the door, but Jim had barred the door. They hear the stick leaving. They run for it, and go under the bridge, and then he leaves his mom there. She faints. The pirates search the area looking for Jim. After a while, they give up the search and leave. Jim and his mom run to the village and ask for help. No one wants to help him, but they give him a pistol and a musket to defend themselves.

Jim stays there in town.

Jim goes to eat dinner with a squire, Mr. Trelawney and Dr. Livesey, and he shows them the treasure map. Mr. Trelaney sees it and says, “We have to sail within two weeks!”

So they get a whole entire ship together. And the squire finds a cook named Long John Silver who is very nice, and then shows Jim and Dr. Livesey the Hispaniola. When Jim sees Silver, he wonders if he was the one Black Dog was talking about with the one leg and crutch.

Then they find a captain, Smollett. That’s all they needed to set sail, so they finally set sail.

The cook is very nice to Jim and everyone.

One day Jim looks for apples in the apple barrels, but they are all empty, and he accidentally falls in! Then Long John comes up with a couple shipmates who are mutineers. Jim hears them plan to kill everyone on board once they are on the island. Silver says, “Leave the Squire to me. I hate him!”

Jim was very cowardly in the beginning but you see him get more and more courageous and turn into a hero. He gets braver and braver. He sticks up for himself and others.