About two weeks ago we went back to Austin to see all of our friends again. We drove from New Orleans to Austin which was an eight hour drive. We got there at like 10:00 pm and then surprised our friend named Sage who was the only one awake. Next day I saw my friend named Morgan at his school fall fest which was really fun and cool. We had a lot of fun that day:)

Next day we moved in to our house on 1st street which was really cool because we had access to a ton of stuff there and were only like 2 minutes from the south austin tennis center where we played there that day. Next cool thing we did was go to our friend Grace’s party where we got there and organized a huge game of ultimate frisbee which was so much fun. My team won:) 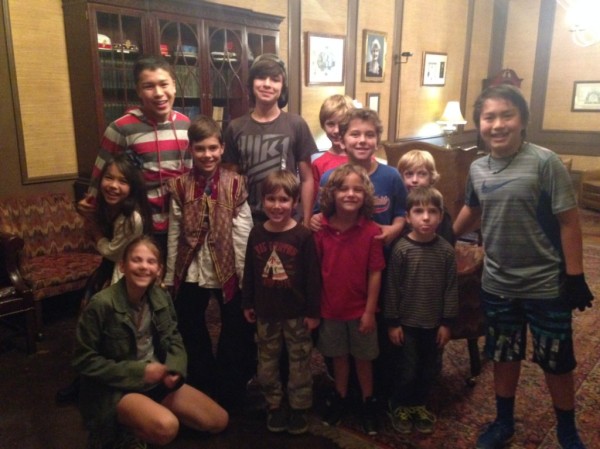 On Friday we went to Jumpoline trampoline park where we met Sage, Morgan, Samuel, and Sophie. When we got there absolutely no one was there which was awesome because that’s really rare. Gabe Jadyn and I jumped for about 30 minutes by ourselves until our friends started arriving. When Sage arrived he started doing a ton of flips because he does parkour, and I finally landed some front flips. Finally.

The next adventure we did was at Rheimers Ranch for a hike. At first we didn’t know where to go because we hadn’t been there in like 3 years even though its one of our favorite hikes in Austin. But then I wasn’t going to give up on finding it so I searched and found the trailhead. And everyone was proud of me. By the way the Denmans, Crows, Kelts and Morgan were all there.

We hiked through a gorge into whats called climbers canyon down a small stream and then it opened up and then there was the river where we had so many memories as a little kid. Once we got down by the river we made home base and then we waded across the river which was ice cold but once you got numb it was fine:) Once on the other side we had so much fun with everyone. By the way all the adults stayed behind except for Mr. James Denman.

Well once on the other side we jumped off of this big sand bank into the freezing cold water or tried to see how close we could get to the water without touching. Until people started jumping all the way into it which was really fun. After that to dry off we played a little game of ultimate tag and then waded back over to our parents where we got back on our shoes and hiked back.

After that for dinner we went to our friend Mr. Joel’s restaurant nearby where he had a huge lawn in the back where we tossed the frisbee and played keep away. So we ate and then drove Morgan and Samuel back to there houses.

A few days later we got together with the Dewey’s, Denmans, and Kelts for dinner to say bye because we were leaving the next day:( But that night was really fun. We ate inside and then got some gelato and moved outside where we had a Bocce Ball tournament and then played some other tag games late into the night while my mom and dad talked to our friends’ parents till about 10:30 when we said bye.

I wanted to say bye to Morgan so we swung bye their house and luckily Quincy was up and opened the door but Morgan was asleep on the couch so I woke him up and said bye and see you in Colorado!

Next day we left to Dallas where I am right now and where I’m writing this post:).